Find The Info You Need

There are no shortage of idle clickers on the App Store, but one that sticks out in the brilliant PartyMasters by Playgendary.

With a bold visual style, topical theme and overflowing with juicy feedback, let’s take a deeper look at the user experience design of PartyMasters.

The artwork for this game is fantastic. It’s a hybrid between a modern flat vector style with a super cool 90s neon palette. The art style and theme plays on current pop culture references and memes, added buckets of character with slick and comical character animations. 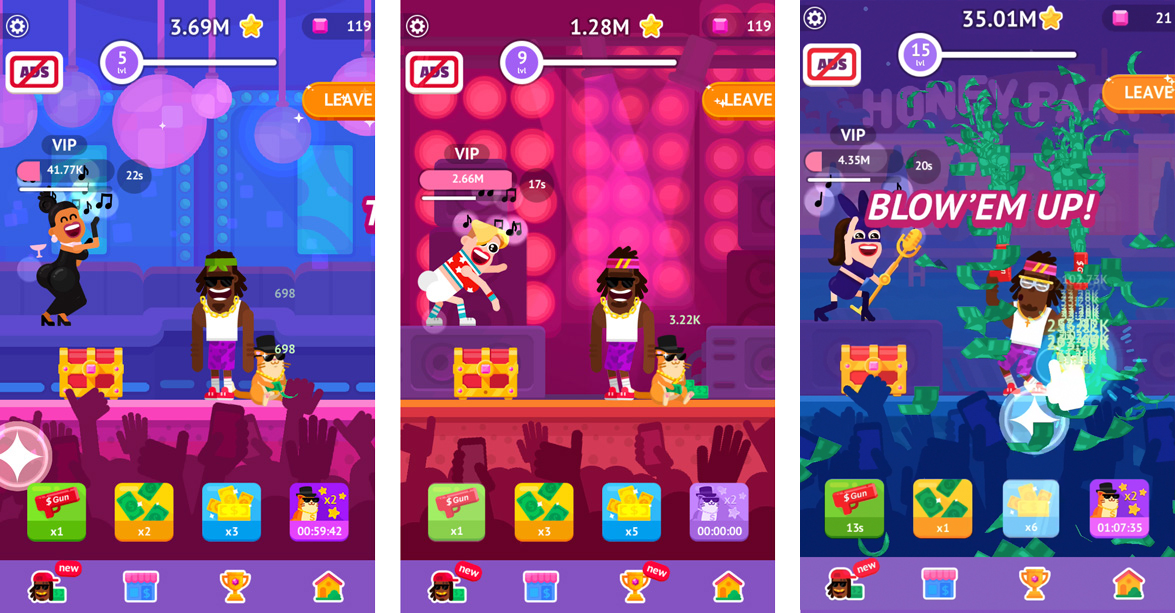 As you play the game throws out quotes such as “Like a boss” and “Hella good”. The main super character even kinda looks like keyboard cat.

Whilst these references might not be on the bleeding edge of internet cool, Partymasters walks the line very well. It feels very aware of what it is without trying too hard, at times almost poking fun at itself. 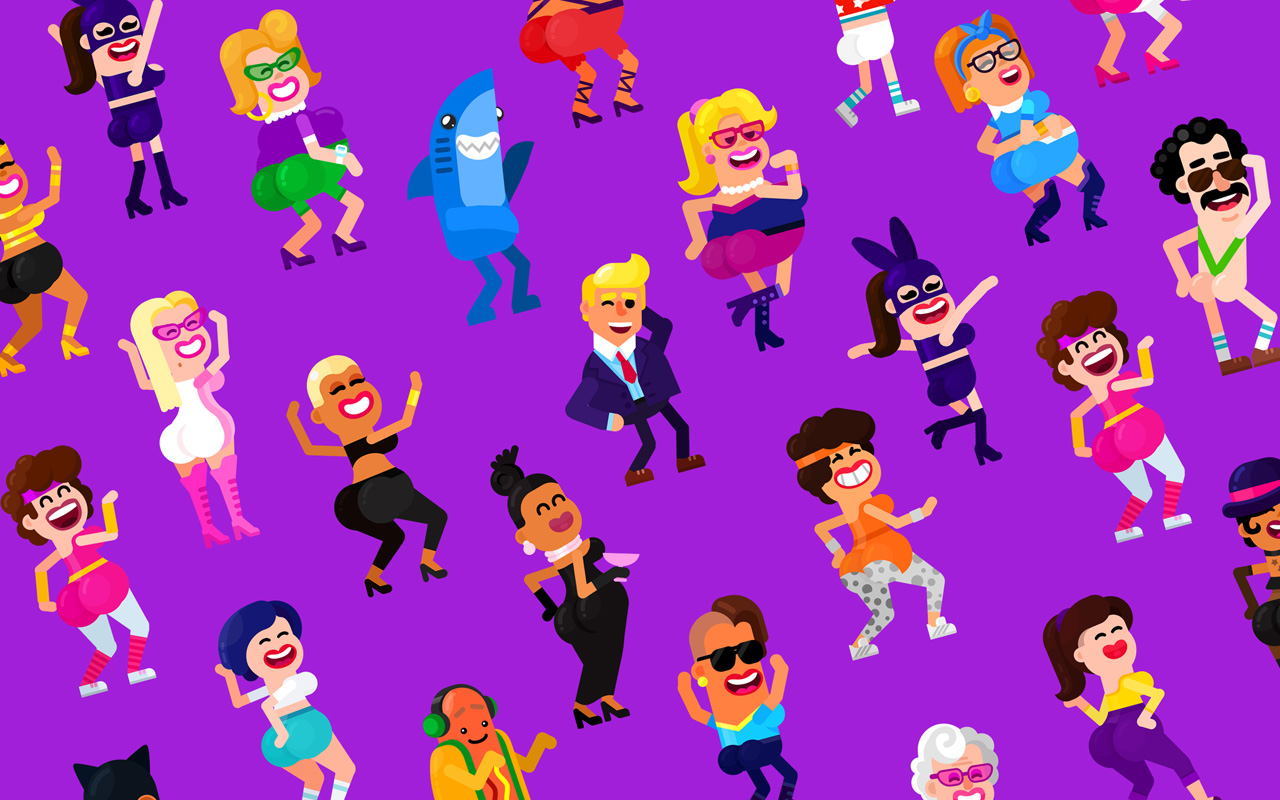 Modern pop culture references are in abundance throughout the game. I saw the main character dab. The super bowl shark is in there. Donald Trump even makes an appearance, wiggling his butt. This is no surprise as the developer, Playgendary, had a ton of awesome characters in their previous game, Bowmasters.

Playgendary has made clever reuse of art assets in PartyMasters, keeping the same art style and overall tone consistent with their previous title. This works well for brand awareness, product recognition and ultimately player loyalty. 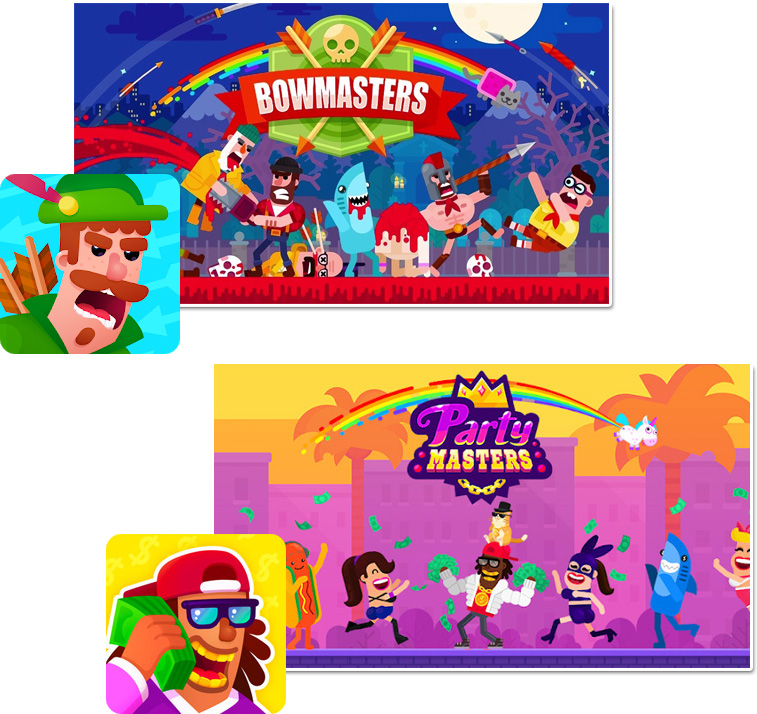 After first 10 minutes with the games I was presented with a one time offer.

After declining the offer, the rate of adverts ramps up significantly, but even so, I do wish more developers would take softer approach to displaying adverts.

Up until this moment, I hadn’t been served an advert wasn’t out of choice. This allowed for a uninterrupted first time user experience that was highly enjoyable.

Doing this allows players can get both a sense of the game flow and have ample time to invest emotionally without being put off by lots of adverts. 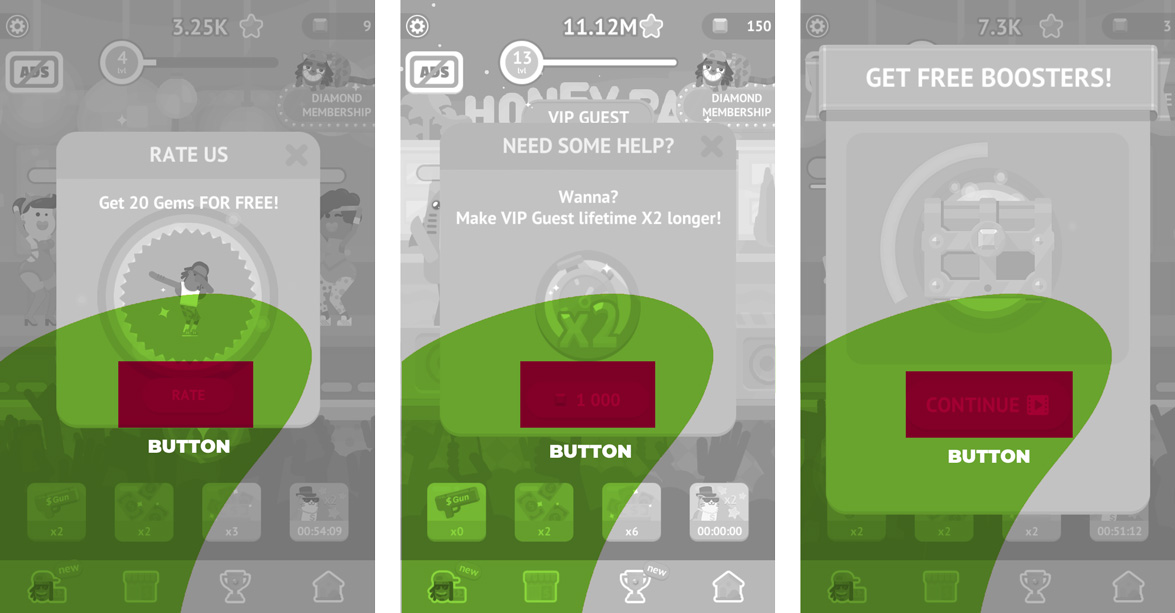 It is debatable whether no not this was an intentional design decision, but the buttons in the UI are placed directly when you are being conditioned to tap continuously.

This resulted in several accidental button presses trigger adverts due to the UI opening without any direct input. Intentional or not, placing buttons in the area players are being conditioned to consistently press is a dark move and was the first time I really noticed poor usability patterns in PartyMasters.

Whilst ads in games can become annoying, I have no problem with developers placing adverts in free to play games, however, many times I install games only to be boobarded with adverts right from the get go.

To PartyMasters credit, by the time I saw my first advert, I was fully invested and enjoying the game so was quite happy to keep playing, despite accidentally pressing on a few buttons accidentally.

The feedback design in PartyMasters is superbly executed.

As you tap the screen, haptic feedback starts kicking in along with screen shake. This almost created a rolling motion as you get a flow going. When you stop tapping, instead of the haptic feedback stopping abruptly, it continues to roll, slowly fading out. This creates a strange sensation that you’ve lost your rhythm causing you to instantly begin tapping again.

In addition, triggering a booster cracks up the pizzaz and feedback with special animations and visual effects.

Several times during each session the game triggers UI to double rewards or get boosters. The primary button on these popups trigger video ads, with the secondary closing the UI. Interestingly, the secondary option isn’t displayed until after a few seconds.

Whilst there is a traditional ‘shop’ in PartyMasters, the developers have focused to push a subscription based model via a Diamond Membership. 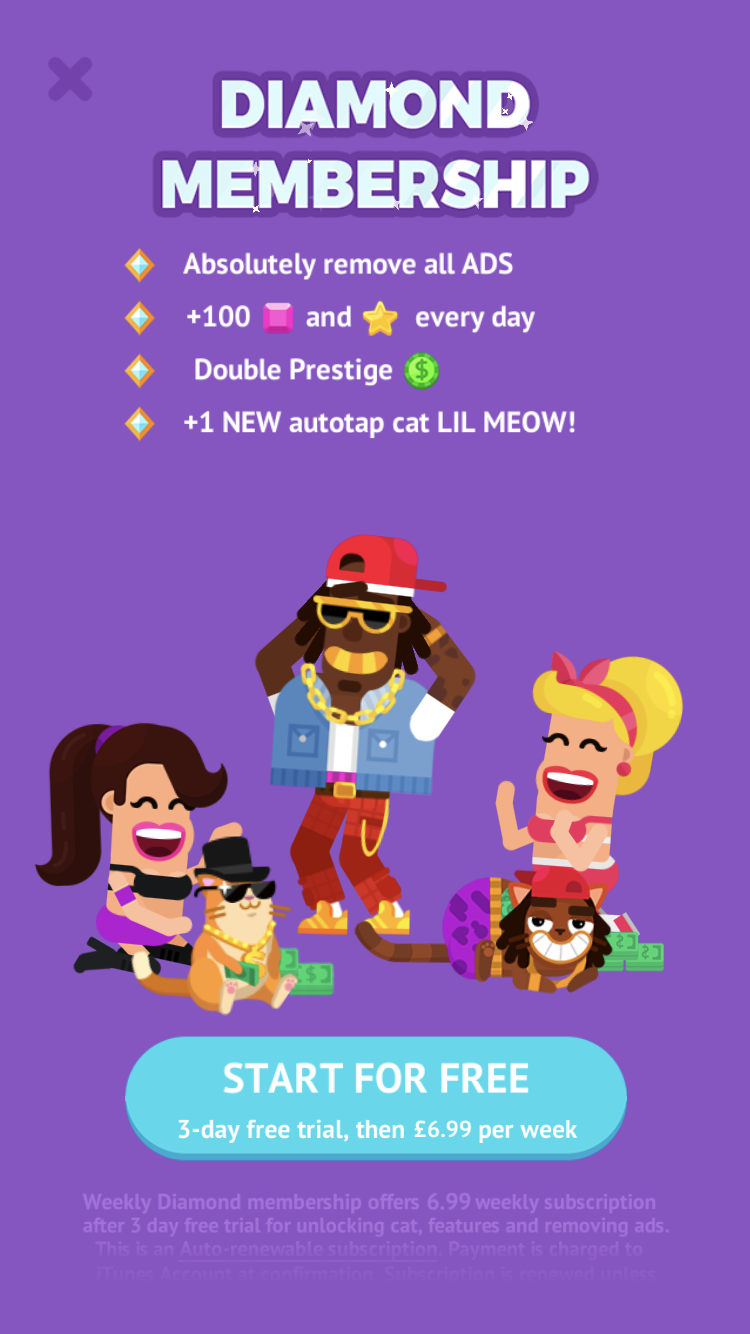 Players still have the option to buy hard currency in the game, which can them be used to purchase durable boosters to speed up progression.

PartyMasters is an absolute blast to play. It draws you in with simple, accessible mechanics, its brilliant theme and art style. The game is jam packed with juicy feedback resulting in a highly entertaining user experience. Give it a go.

UX4Games is for anyone looking to learn more about user experience design in video games. This blog covers mostly mobile free to play games and the occasional console product.