Find The Info You Need

You wouldn’t believe it at first glance, but there are a lot of dark UX tricks at play in the innocent looking Piggy Boom.

Piggy Boom, along with a number of other games including Greedy Gods and Pirate Kings, all follow a similar format to the highly successful Coin Master. 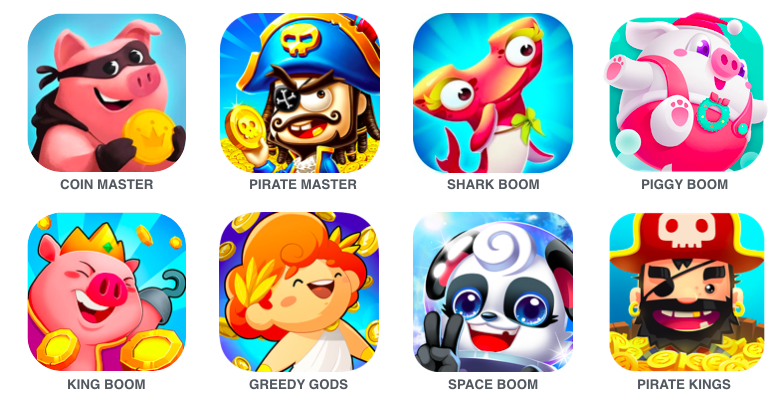 You might be wondering how any game that looks like this could be “dark”. Well, looks can be deceiving. There’s some of the crafty UX patterns at play in these games, as well as a complex metagame systems and an compelling social loops.

Lets delve deeper into some of the dark UX patterns at play in these games, in particular Piggy Boom and Coin Master.

Does the logo of the Piggy Boom developer remind you of a certain other popular mobile game developer? 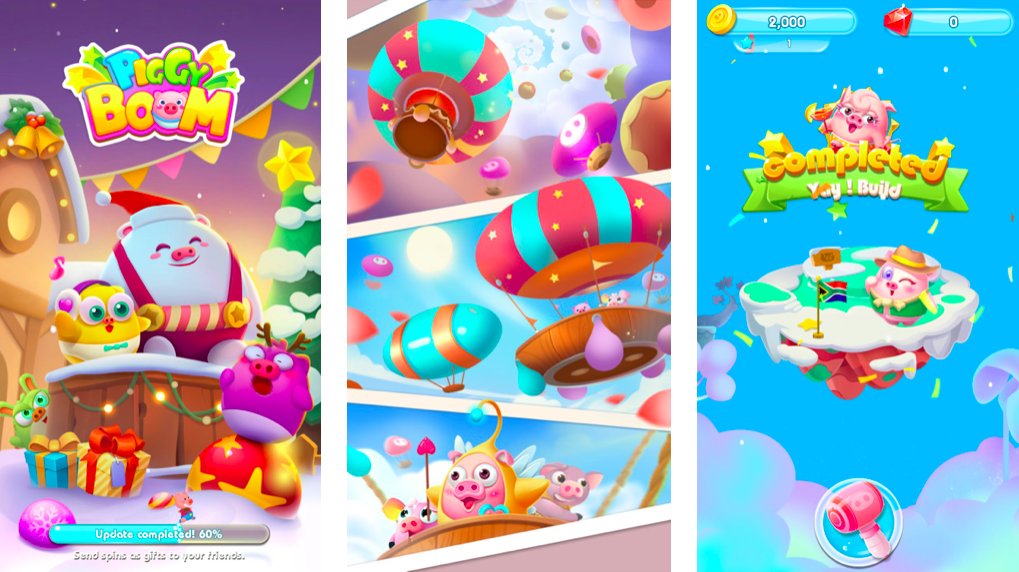 It’s not just the logo that is reminiscent of King. The overall game art for Piggy Boom has a very King-like feel – which isn’t a bad thing! It is filled with charm in a fun and friendly way, clearly appealing to a similar target audience who enjoy popular King titles such as Candy Crush or Farm Heroes Saga. 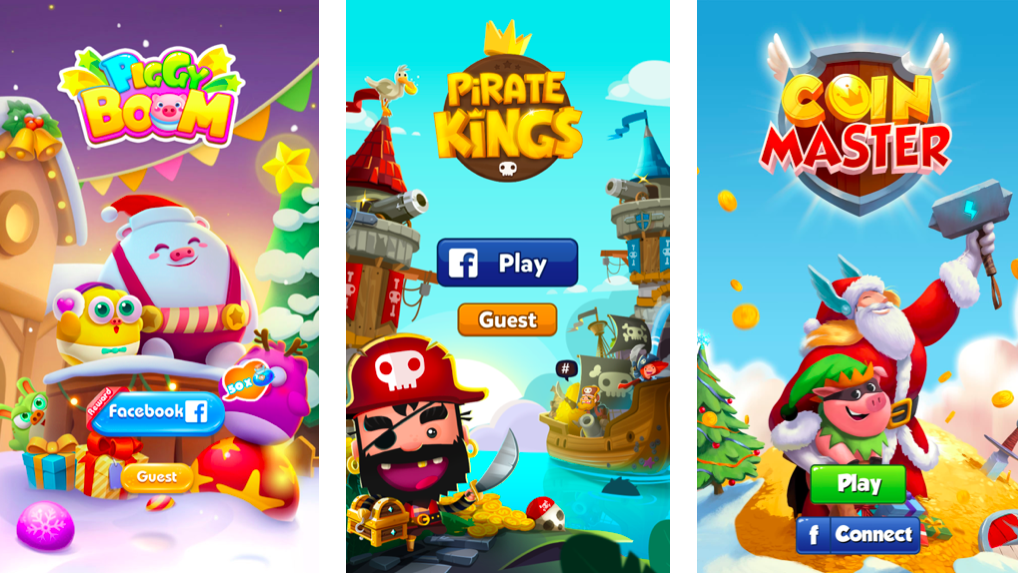 Piggy Boom, Coin Masters and pretty much all the other games mentioned above all do a great job of getting you to connect to Facebook right from the initial moments of loading the game.

It is actually pretty tricky to get into the game and remain playing as a guest due to some cleverly design user flows and strong incentives to log in with Facebook. 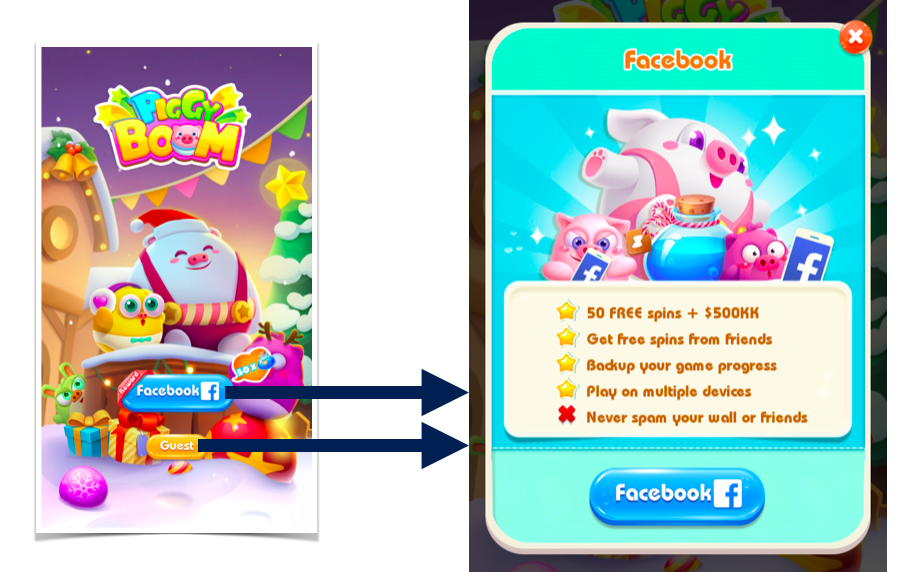 On the surface, logging in to Facebook might not seem like a big deal. After playing for a while however you soon come to realise why the developer chose this route. There are many dark UX patterns used throughout the games UI and user flows where being logged into Facebook subtly nudges players to perform actions such as sharing the game or asking friends for help. These are discussed in more detail below.

The ‘core’ game in these games is essentially a slot machine, with each spinning providing you with the following:

Spins are limited but refill every hour resulting in a strong retention hook and varying monetisation pinch points. 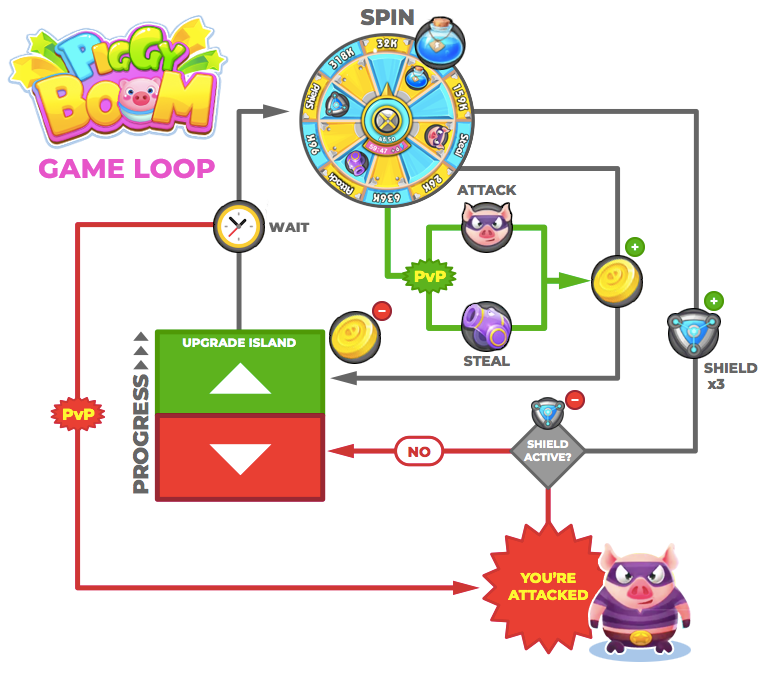 Gold earned from spins is used to upgrade you island or village (Piggy Boom has islands, Coin Master has villages). Once the island has been completely upgraded, you can process onwards.

Stealing and attacking is incredibly satisfying, especially when playing against friends and smashing up their island!

Sitting above the spinner is an opposing player known as the “CashKing” with a display of their current gold. When landing on the Pig icon, you get to pick who you think is the correct CaskKing between 3 different players. 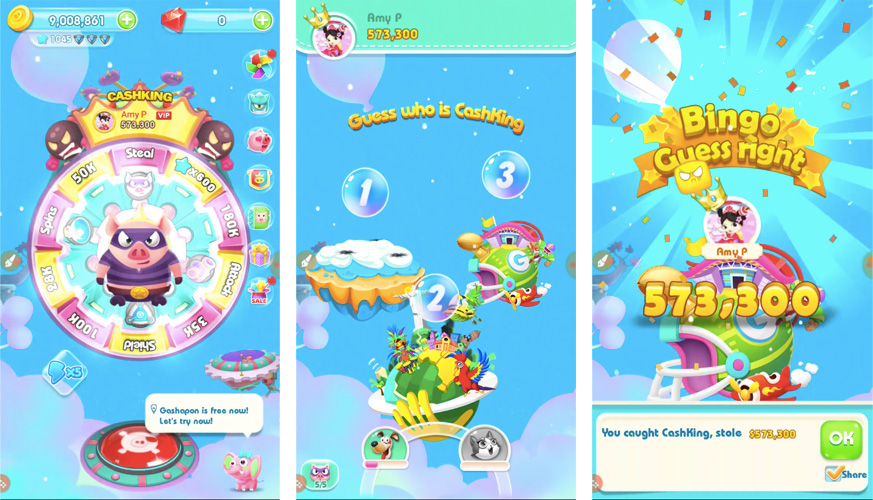 Finding the “CashKing” never gets old

This is all very peachy until someone comes along and attacks you, destroying all the hard work you put into upgrading island and taking your gold. 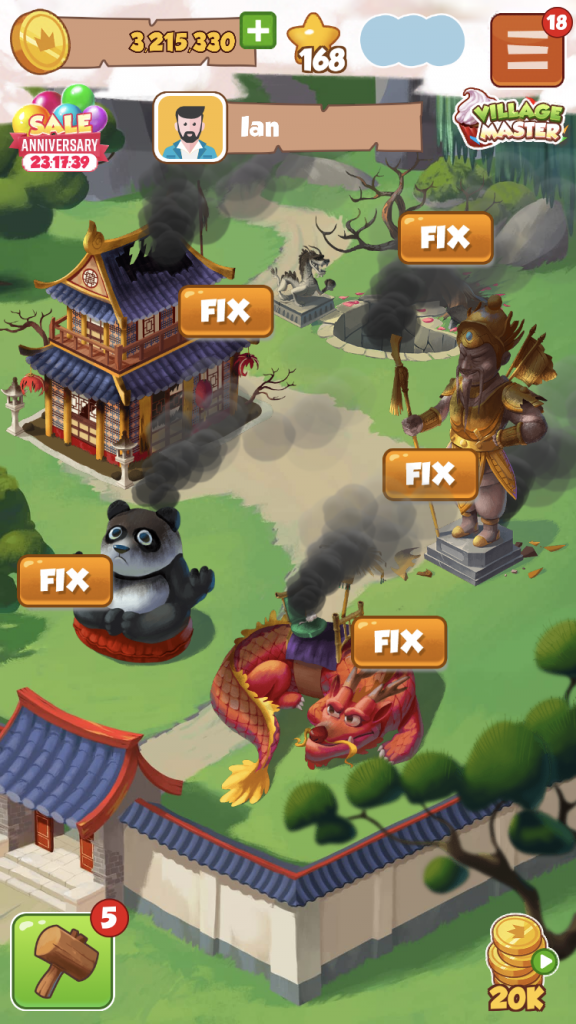 During these moments, the game feels very remanisant of Clash of Clans. You can’t help but feel complete and utter loathing for the opposing player and instantly feel the desire to take revenge.

After each attack, I found myself going back and forth with the same friends or opposing players, each time trying to one up each other, putting focus on the social loop. 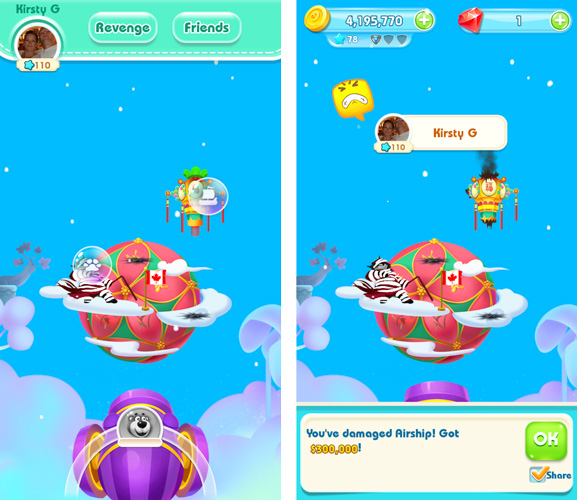 Notice on the last screen the share option is ticked by default? This dark pattern is used throughout the game, particularly those rewarding high point moments.

This is a very similar design pattern to those used on website registration forms to get users to opt-in to newsletter signups. Not great from a users perspective as the flow is designed to channel you down the route to share as much as possible.

In both Piggy Boom and Coin Master, even if you untick share on one of these instances, the share button will still be automatically ticked for the others.

To complete each island, players need to upgrade five different objects using coins from the spinner. As players upgrade each item there is a small visual upgrade, making islands look grander as they progress. 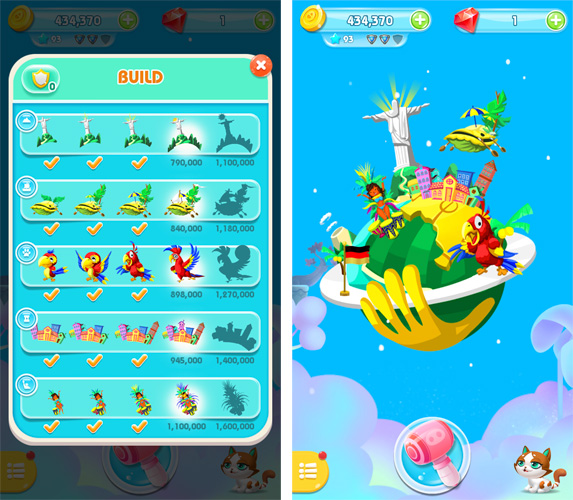 Initially after reaching a new island, the cost to upgrade each item is fairly cheap, however the costs soon being to escalate. Very quickly you reach a point where you’re feeling the pinch by not getting enough gold, even from completely exhausting spins from the spinner.

This forces players into a a situation where they have to wait several hours for spins to refill, leaving nearly completed islands under threat of attack. This is an interesting moment that puts various different pressures on the player motivating them to convert.

To avoid losing process, players can either buy more spins, spam friends on Facebook… or do nothing and risk losing progress. If players chooses not to monetise, there is always an option to ask friends for help, increasing the games virality, aiding with user acquisition.

This flow is presented every time you run out of spins:

This is very heavy handed UX. Firstly players are presented with a screen when they can directly buy more spins. Decline this and another popup opens inviting players to invite Facebook friends to the game. Lastly players have a option to watch video for one additional spin.

Upon reaching this pinch point you quickly realise the value of shields, especially how important they can be when you need to keep your island protected when it is so close to being finished.

These are all powerful motivators for monetisation as the closer players get to completing an island, the more costly even a small set back can be.

Each new worlds provides this same pain point by frequently putting player into this position. This is a clever move from the developers from a monetisation perspective.

The amount of time it takes to complete each island or village really slows content production for the developers. Unlike games like Candy Crush, there are no costly levels that need to be created and carefully balanced.

A small change to the spinner, some art assets for each island and you’ve got yourself enough content for in several days (if not weeks) of gameplay. This is a smart and cost effective development approach, likely buying the developers significant time to produce content and get it into the game.

After running out of spins, besides being in a delicate situation, there isn’t a whole lot else players can to do – Try and get more spins/gold somehow or painstaking wait.

Next to the main spinner are a bunch of buttons. Some of these simply display popups which tease information about new features that are unlocked on later island, intriguing the player about upcoming content and improving pull through.

These buttons don’t have any text labels and their iconography is fairly ambiguous. Curious players soon discover some of these buttons take you to smaller mini games, granting a small amount of gold or spins.

These mini games reward curiosity, create an additional layer for retention and offer additional opportunities to play with friends. 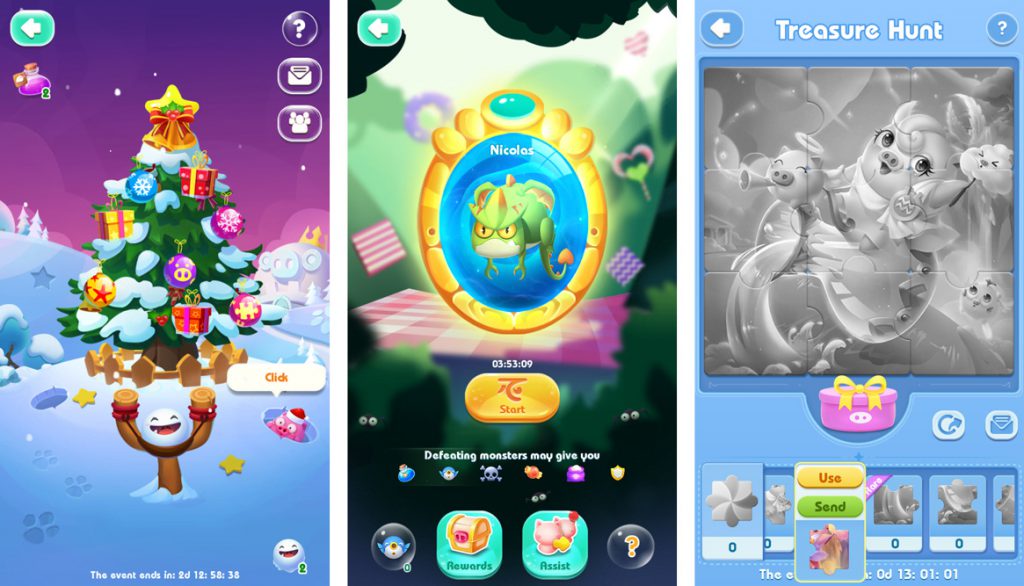 Coin Master offers a very swanky looking daily spinner. From using this spinner, players have the opportunity to gain some additional gold once every few hours. 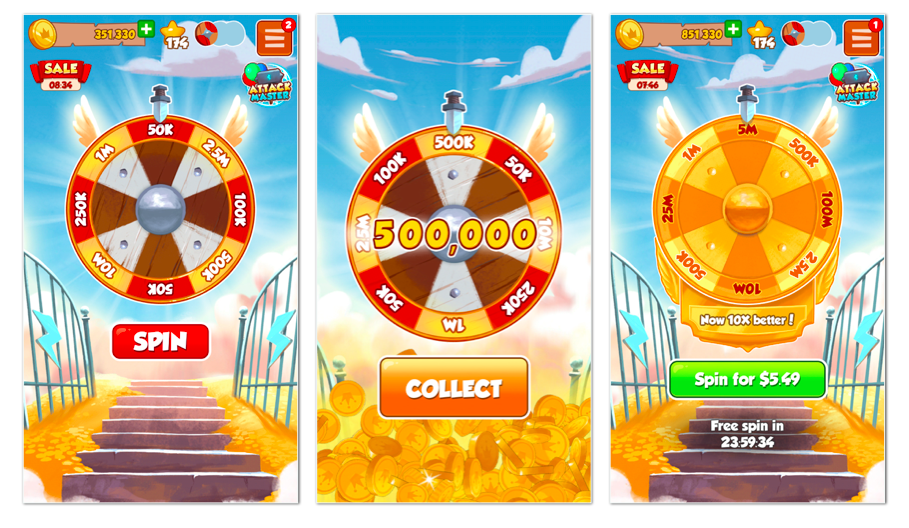 The darkness is found in the user flow.

After opening the spinner and collecting the gold, the regular spinner disappears, revealing an even more swanky looking golden spinner with higher values. Players can have a go on this spinner for a small amount. Having just received a reward from the previous wheel, players will clearly understand the potential benefit of using a feature like this. Therefore, this is an extremely well placed IPA and conversion point.

It is worth noting that the “10X better” golden wheel has glimmering graphics and pulsing animations to help showcase its higher tier, premium value.

Probably the darkest thing about this user flow is the exit point – how the hell do players get off that last screen? Unlike the rest of the UI which has a back or close button, this screen breaks usability conventions found across the rest of the game and forces players to swipe down to exit.

There are frequently offers happening in Coin Master, all of which are for a limited time only.

Each of these screens was triggered upon opening the game at some point. Each offer has it’s own bespoke piece of artwork, making each offer stand out, look visually exciting and nicely designed. 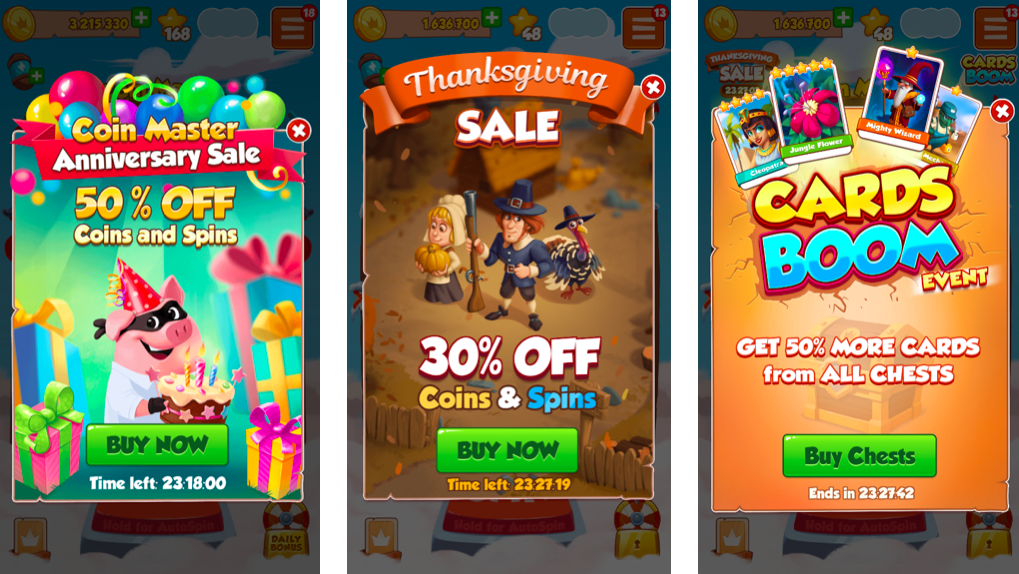 Whilst having an offer on isn’t exactly ‘dark’, putting time pressure on the offer adds an layer of urgency and fear of missing out to any offer.

Granted, some offers are better than others, but after playing for a while you soon come to realise there is pretty much always a sale on of some description. That being said, in those moments where you need to squeeze a few extra coins out to complete your village, 50% off coins can seem very appealing.

Overall I enjoyed playing Piggy Boom and Coin Master. I even dropped a couple of quid on the game to help me protect my island a couple of times. I was surprised how deep and complex the overall game systems are and thought there were some smart, if a little dark, UX patterns at play.

I’m looking forward to seeing what these developers comes out with next and to see how other developers might take this format and tweak it to form something new.

UX4Games is for anyone looking to learn more about user experience design in video games. This blog covers mostly mobile free to play games and the occasional console product.